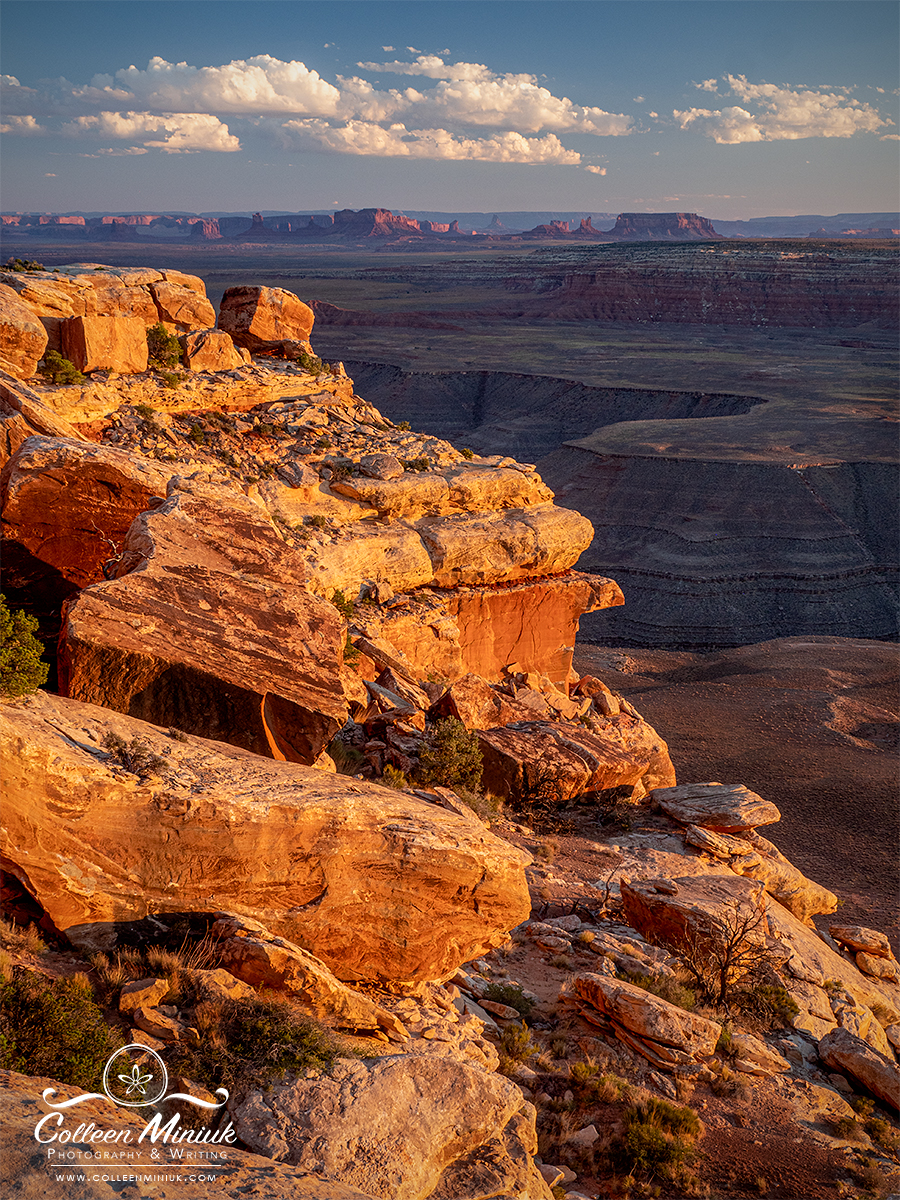 Dear Bubbles:
I’ve been told to never shoot at f/16 or f/22. I noticed that you seem to do it all the time. What am I missing? Should I or shouldn’t I shoot at those apertures?
~Audrey

As Charles Dickens wrote in his first novel, The Posthumous Papers of the Pickwick Club, “Never say never.” It’s unfortunate you’ve received such a directive, especially if it didn’t come with a reason or explanation. You should—and shouldn’t do—whatever makes sense for you in executing your photographic vision.

What you’ve seen of my work is true. I use f/16 and f/22 frequently for my landscape photographs. Not all the time but a lot. When I’m in the field, before I pull my camera out of my backpack, I first visualize the visual message I wish to convey through my photograph. Oftentimes I title my photograph beforehand or write a haiku about it to help me distill the chaos I observe into something orderly. Sometimes I don’t have words for it and trust my intuition instead. Whatever message I come up with drives all my technical decisions. I deliberately chose what lens to use, where to stand, how high to set my tripod, what exposure settings to use, etc.–all before ever touching my camera.

When it comes to achieving the depth of field I desire, I decide before I photograph whether I wish for broad or short depth of field. Then, I answer two questions:

To reach a conclusion, I consult my depth of field app on my phone, DOF Calc, specifically looking for the hyperfocal distance given my camera, chosen lens, and aperture. The hyperfocal distance will tell me what in my composition will be in focus for a given aperture and focus point distance. It’ll help me confirm whether or not everything I wish to be in focus will be in focus when I make my photograph. (For details on how I approach this, visit my “Another Dose of Depth of Field” post.)

Based on physics and how camera manufacturers build lenses, a lens is sharpest approximately two stops over its widest aperture. This is a general rule of thumb. Because of variances in the manufacturing process, what aperture yields the sharpest photograph can differ per lens and per brand.

If you haven’t already done so, I’d highly recommend testing your pile of lenses to find the sweet spot. Set up a single composition on a tripod to keep consistent from frame to frame. Then make a photograph at each of your major aperture settings (i.e., f/2.8 f/4, f/5.6, f/8, f/11, f/16, f/22 and f/32 and f/45 if you have the latter two settings available). Load all of the frames into your chosen processing software and view each of them simultaneously on your computer screen at 100% (or greater) magnification. What do you see? Which aperture looks the sharpest? Repeat this test in a variety of indoor and outdoor lighting conditions if you wish for a broader, and thus more convincing, data set.

Hypothetically-speaking, let’s say I have a composition set up that requires my 12mm lens (i.e., equivalent to 24mm in 35-mm and full-frame cameras). I have a rock positioned in 1 foot away from my camera that I want to be in sharp focus. I also want the mountains in the distance to be in sharp focus. When I check my DOF Calc app, I see that at f/8 renders a hyperfocal distance of 4.07 feet. That means if I set my focus point at 4.07, everything from about half that distance (2.04 feet) to infinity will be in focus. That’s fine and dandy, but that range does not include my rock. At f/8, my rock will not be in focus. So while f/8 might yield the sharpest photograph, it does not enable me to achieve my visual goals. At the risk of sounding snobby, I’m not willing to sacrifice the integrity of my personal expression to meet technological limitations. In other words, I ain’t changing my composition.

If we know that a big number aperture renders a bigger depth of field, why don’t we just skip all this crap and automatically set our cameras to f/16 or f/22 and be done with it? Why do we have to suffer through all this math and apps and focus points and hyperfocals? One word: diffraction.

According to the Merriam-Webster Dictionary, diffraction is defined as “a modification which light undergoes especially in passing by the edges of opaque bodies or through narrow openings and in which the rays appear to be deflected.”

To better understand how this works, imagine a body of water with waves flowing toward an opening in a breakwater or seawall. If the opening is large, the waves flow through without much obstruction. If the opening is small, the waves constricted as they move past the obstacle, then spread out on the other side (i.e., deflection). This same interference happens with light, which moves in waves, like waves.

When light passes through a lens, which has a circular-shaped hole (literally the aperture), it casts a circular-shaped light pattern onto the sensor. The brightest part of this pattern falls in the center and is formally called an “airy disk.” Concentric circles of light extend from this center. Together the airy disk and concentric circles are called an “airy pattern.” Fancy calculations are involved, but for those who don’t love math, the larger the aperture, the more pronounced the airy pattern. The waves don’t constrict; they remain more intact. The image that results looks sharper. The smaller the aperture, the larger and more spread out the airy pattern. The light beam is sharp in the middle, but then the light gets less intense as it radiates from the center. The image that results looks softer. (Hence, why you see in the photo comparison above why f/22 looks softer than f/8.)

Given this, you might be wondering why f/8—and not f/2.8 or f/4—renders the sharpest image. After all, f/2.8 is a larger hole than f/8, right? Two words: chromatic aberration.

According to our good friends at Merriam-Webster, chromatic aberration is “aberration caused by the differences in refraction of the colored rays of the spectrum.” To help us understand what this means, an aberration is, as it relates to photography, “failure of a mirror, refracting surface, or lens to produce exact point-to-point correspondence between an object and its image.” And refraction is “deflection from a straight path undergone by a light ray or energy wave in passing obliquely from one medium (such as air) into another (such as glass) in which its velocity is different.”

Wikipedia sums it up best: “failure of a lens to focus all colors to the same point.” In a photograph, this appears as an unsightly green or magenta halo around the edges of pixels. Some call this “The Purple Fringe.” While this can happen with any lens and any aperture, the amount depends on how the lens was manufactured. We can reduce, but not necessarily fully eliminate, chromatic aberration by stopping down our aperture setting (and also by shooting with high quality lenses). An f/8 aperture seems to balance maximum sharpness with tolerable chromatic aberration—but it’s not always the right answer.

I chose small apertures to help me achieve a specific depth of field. (It also helps me convey a blur in water, for example, by slowing my shutter speed.) If diffraction concerns you but you still want extensive depth of field, an alternative to creating a single image at a small image is focus-stacking. Focus-stacking is the process of making multiple frames at different focus points and then blending them either in camera or in processing software. Start with an f/8, but vary your settings to achieve the sharpness and depth of field you wish.

I am aware of the confines of my equipment and physics, but I don’t allow either to stand in my way of conveying what I wish to express through my photographs. I’m in charge of this image-making operation here! You’re in charge of yours. Besides, few people ask me my aperture for a given photograph, save for curious photographers. And I have never heard anyone say, “Wow, Bubbles, what a nice photograph! You know, it could have been so much better had you not had diffraction.” At least not yet. But perhaps we should say, “Never say never…” 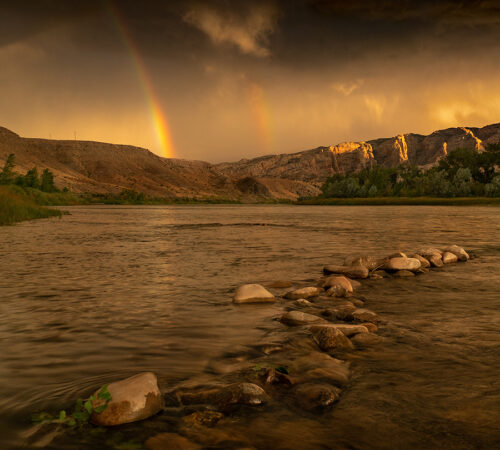 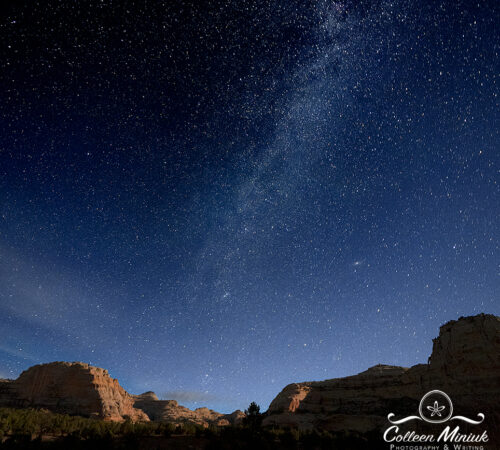 Shoot for the Stars 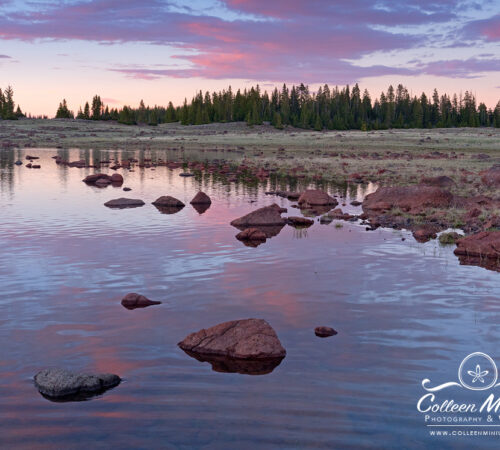